The Last Night at Rocket Pizza

It was a night like any other, we started with 7 skaters, one dog and one youthful-American just after 8pm. The night was soft with a thin haze of smog, but it gave no clue of the terrible news that it had in store for us.

We skated Mateo to the Warehouse district, the crossed through the Fashion district into the Church of Money. A brief skate around there took us back toward pershing square, then up and over the hill into Chinatown. We stopped on the Chinatown garage for a view of the city (see the panorama below) then we headed back to the parking lot to drop off the underaged and non-human participants in the evening's festiviities.

All good things must come to an end... 'tis the same with Rocket Pizza. 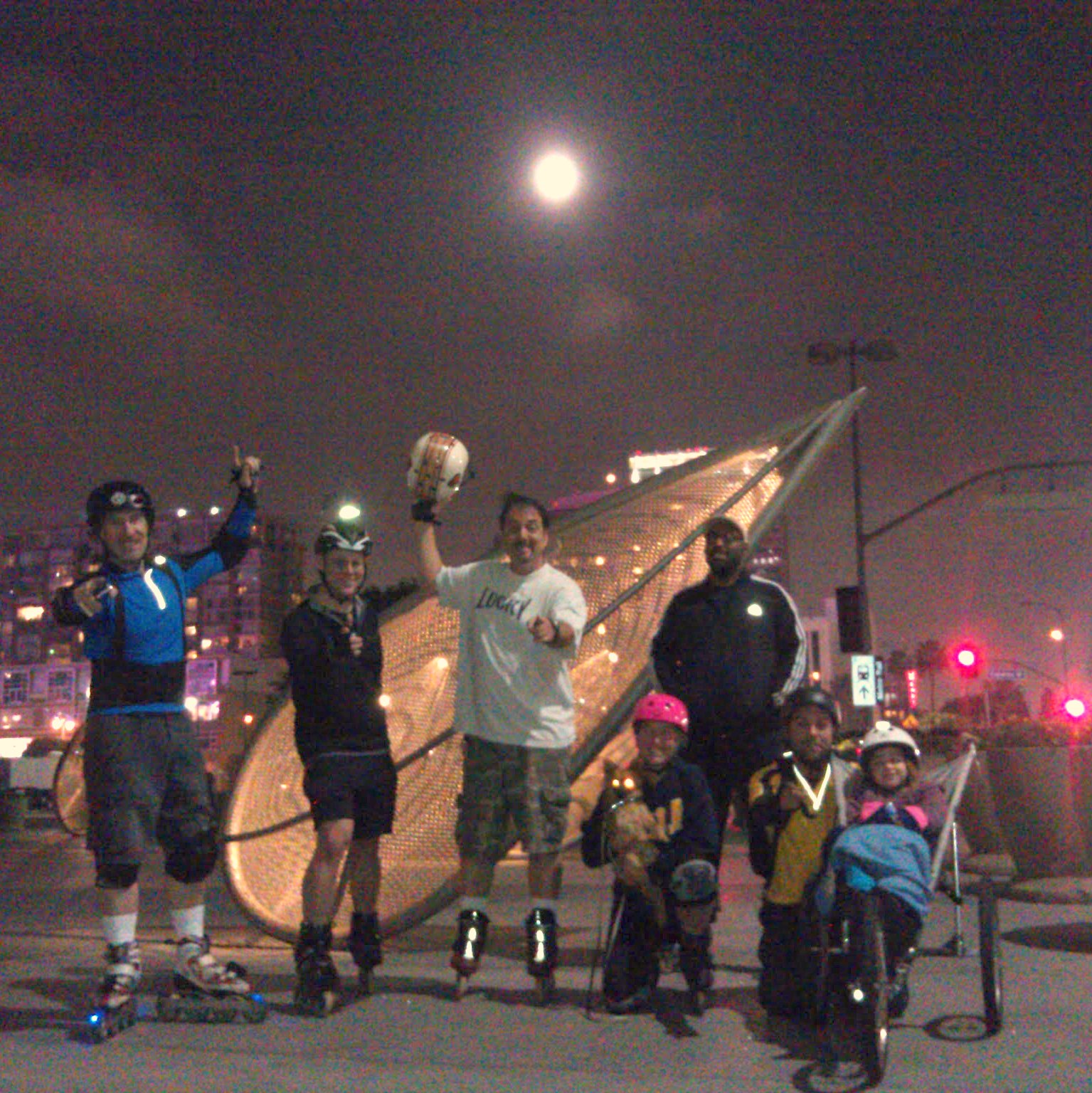 We've been through several restaurants in the 4 years TNS has been going on. We've looked high and low for a place where we could roll in after a skate, grab some food and brews, then go the hell home.  It's not a lot to ask really, and we tip well, never ever leaving less than 20% on a tab.

We started with "Senior Fish".  First they changed their happy hour from 9-midnight to 3-9pm. Then they started having "comedy". Then they stopped serving food. I don't know if they're even open late anymore, but we haven't been there in a couple of years.

Next we found WürstKuchë (pronounced Vurst-koo-kah), a brand new bar/restaurant specializing in beer and weird sausages. They LOVED us... until they got more business. After about a year of giving our hard earned cash to them and talking them up to the whole neighborhood, they kicked us to the curb, refusing to allow us to even sit amongst those most vile and unpleasant *smokers* (gasp!) out on the sidewalk, lest we unleash sock smells on their other patrons, and wade through the grime and much shod only in cotton and nylon.

There was also the "Hideout", a divey little place at Boyd and San Pedro... although they had excellent beer and "buffalo mushrooms", the beer was 5 bucks and up and the damned mushrooms cost a buck each.

Then one day we found Rocket Pizza.  They had $3 PBR's and offered a quarter of a medium pizza for $3.  We have been there practiaclly every week since, imbibing and cavorting,  It's been nice, and we've probably been there 30 times since discovering the joint. Unfortunately that's come to an end.

Our waitress, who has held forgotten items for a week until we returned on more than one occasion, informed us that the clown who owned the place decided it would be better to close Rocket and expand his over-priced, dimly lit poser palace Bar 107 nextdoor into the space.  i'm pretty sure we won't be going there.